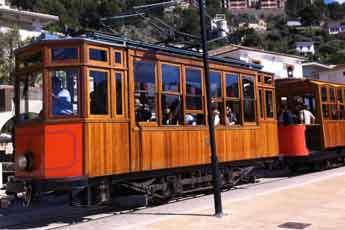 With the “Red Lightning” from Palma to Sóller

Admittedly, the train is not a very present means of transport in Mallorca. But the few rail kilometers that the Balearic Island has to offer are all the more exciting. Tren de Sóller is a historic small train that runs between Palma and Sóller, which exudes a special flair and is not only a real highlight for rail enthusiasts.

While Tren de Sóller is now primarily a tourist attraction, it used to ensure the survival of Sóller residents. For the residents of the municipality in the Serra de Tramuntana, the journey to the island’s capital was long and difficult. But to sell their agricultural products such as oranges and almonds, they had to go to Palma, about 30 kilometers away. It takes at least 40 minutes by car.

In order to simplify the arduous footpath, the residents of Sóller teamed up and founded a joint-stock company to finance the railway line, which still exists today. The route is 27 kilometers long and construction began in 1907. 13 tunnels had to be drilled for this. The journey on the leisurely small train, which rumbles over tracks that are only 914 millimeters wide, takes about an hour. The railway has been running since October 7, 1911, and was officially opened on April 14, 1912. It is still operated by the Ferrocarril de Sóller.

The small train, which still bears the nickname “Red Lightning” due to its former color, has beautiful wagons with old wooden benches, brass lights and luggage nets. The Tren de Sóller runs several times a day, both in summer and in winter. You can easily start from Palma or Sóller in the morning, spend the day in the respective city and return in the evening. The drive alone, past olive groves and almond trees, is worth it. The Tramuntana mountains always in view.

Incidentally, the tram line from Sóller to Port de Sóller was built at the same time as the construction of the railway line between Palma and Sóller. This route also leads through picturesque orange groves.

The one-way trip with the Tren de Sóller costs 25 euros, the return trip on the full route costs 32 euros. There are stops at various train stations along the way. There is also a combined ticket for the train and tram. Incidentally, the “Red Lightning” is the safest means of transport in Mallorca. The small train has run without an accident for 90 years.