The best rice comes from Mallorca 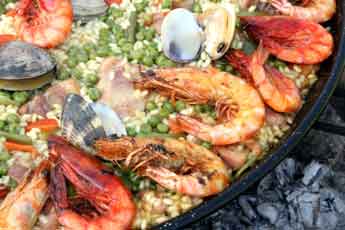 The best rice from Spain comes from Mallorca

Rice is almost as important to the Spanst people as it is to the Chinese. After all, the small grain is the main ingredient of paella – the national dish of Spain. But because rice is much more than a rice pan with seafood, Spain’s best rice dish is awarded every year. This year, Cati Pons prevailed with their rather down to earth court against the delicate and strongly male-dominated competition.

Mejores Arroces de España (Best Journey from Spain) is the name of the competition that is not just one of many in Spain. The jury is top-class, as evidenced by the award-winning chef Kiko Moya from the restaurant L’Escaleta. The competition is less about rice than about its preparation. The relatively neutral food can finally be combined with all kinds of different ingredients.

This year’s jury included Arroz Caldoso with pork cheek and foie gras, rice with chestnuts, rabbit and flower garnish, truffle rice with shrimps, a delicate mushroom risotto and of course the inevitable paella mixta. However, Arròs del Carboner has won, as the Mallorcan name implies. To German: Köhler rice.

Cooked the rice Cati Pons. At Els Fogons de Plaça in Bunyola, their restaurant, you can not order a table, although it can not save itself from inquiries. The down-to-earth cook offers her daily changing lunch dishes only to take away. Cheap Köhlerreis costs € 7.50, which will be due to the enormous request in the next few weeks in addition to the daily special.

Pons rice dish has won not only because it tastes so good, but also because it is authentic. While the wood in the kilns became coal, the charcoal burners had plenty of time to turn the ingredients they had brought from home and found in the forest into tasty dishes. In addition to herbs, mushrooms, sausages and snails that were even songbirds.

There are no birds in the charcoal rice of Cati Pons, but lard specially made for them, sobrassada sausage, pine-scented mushrooms, ramallet tomatoes and homemade olive oil. The sympathetic 50-year-old with only two employees also passes on her cooking knowledge in cooking classes.