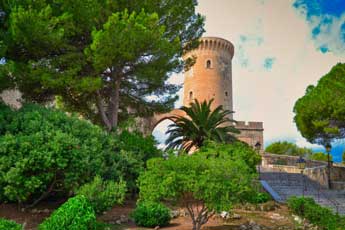 Visible from afar over Palma, the capital of the island, is the Castell de Bellver. The castle from the 14th century is unique in Europe, because it is a rare rotunda. The well-preserved castle is home to a museum on the history of Palma de Mallorca and offers great views of the city, the sea and the region.

The Castell de Bellver is located only three kilometers west of Palma. You can reach it not only by car, but also easily by bus. The blue city buses are cheaper, but stop at the foot of the castle, which requires a little walk up the steep hill. The red sightseeing buses are more expensive, but leave their passengers out in front of the entrance.

The castle, built by architect Pere Salvà, was completed in 1309 and has since become a masterpiece of Catalan-Gothic architecture. The circular design is rather unique throughout Europe. While the castle still looks like many other fortifications from the outside, it exudes great joie de vivre from the inside. The highlight is of course the round, two-story courtyard. He is used today for events such as concerts.

Museum of the History of Palma

On the ground floor of the complex is housed since 1936 a museum on the history of the city of Palma de Mallorca. Under the castle there is an artificial cave network. The main cave was used as a dungeon, where the prisoners were pushed five meters into the depths. The castle itself served as a prison for several years. Coins were also coined here in the meantime.

The Castell de Bellver, which translates by the way means “beautiful view”, is surrounded by a four-meter-wide moat. It has three impressive defense towers and a freestanding tower. Next to the museum you can also visit the old castle kitchen and the castle chapel.