The Cathedral of Palma 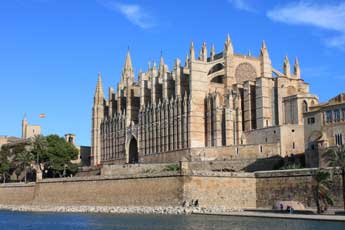 The Cathedral of Palma is the main attraction of Mallorca – and older than expected!

The Cathedral of Palma rises majestically by the sea. The Gothic church reflects the history of Mallorcan art and is a tourist magnet. As the doctoral thesis of the historian Miquel Ballester now proves, the cathedral is probably 60 years older than previously thought.

Even without knowing the age of the Cathedral of Palma, the church radiates grandeur from golden sandstone. At 44 meters, the building is not that high, yet it is one of the most important Gothic-style buildings. The cathedral is 109.50 meters long and 33 meters wide. The main nave (75.5 meters long, 19.50 meters wide) dominates the church building.

Cathedral is about 60 years older than expected

According to legend, King Jaume I and his entourage were in great danger when his ship fleet suddenly got into a storm on the way to Mallorca. The young king took this as an opportunity to take an oath. He swore to build a cathedral if he could drive the Moors from the Balearic Island. Said and done.

So far, it has been assumed that construction began in 1305. Historian Miquel Ballester has shown in his doctoral thesis at the Balearic University, which he presented to a large audience in December 2018, that the start of construction must be between 1240 and 1250. This makes the cathedral around 60 years older than previously thought. His doctorate also clarifies that the construction of the main portal began in 1503 and not in 1590. Construction was finished in 1601 instead of 1630.

The cathedral of Palma is the episcopal church of the diocese of Mallorca and is therefore popularly called “Le Seu”. It is not only the symbol of the island’s capital, but of the whole of Mallorca. The 61 stained glass windows and the canopy created by Antoni Gaudí inside are particularly impressive.

Twice a year, a particularly large number of visitors come to the church. On February 2 and November 11, the sunlight shines through the rosette on the east side so that it is projected exactly under the smaller rosette on the west wall, creating the so-called “magic eight”. The diocese gave this phenomenon the official name “Fiesta de la Luz” a few weeks ago. If you want to see the spectacle, you have to get up early. Around 8:30 a.m. there is perfect symmetry